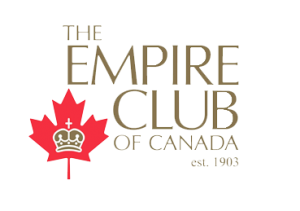 No-one is better placed to provide perspective on, and help produce, the pathway to Canada’s post-pandemic prosperity in that key international context than Angel Gurria, Secretary General of the OECD

Thank you to our Lead Event Sponsor

Thank you to our Supporting Sponsor

As Canadians consider how to build a better economy as the COVID-19 crisis starts to recede, their prospects and possibilities will be shaped not only by the choices of their own governments and firms but by those of their closest international partners in North America, the Group of Seven and the Organisation for Economic Co-operation and Development.

No-one is better placed to provide perspective on, and help produce, the pathway to Canada’s post-pandemic prosperity in that key international context than Angel Gurria, Secretary General of the OECD. He joins the Empire Club of Canada to present the results of the OECD’s latest economic outlook for Canada and its key partners and to report on the OECD’s critical work on transitioning to a jobs-rich digital economy.  He will also reflect on how he has led the OECD for the past 15 years, including during the global financial crisis from 2008-9, and has broadened its work to produce “better policies for better lives” in financial regulation, health, climate change and much else.

As Secretary-General of the Organisation of Economic Co-operation and Development (OECD) since 2006, Angel Gurría has firmly established the Organisation as a pillar of the global economic governance architecture and a reference point in the design and implementation of better policies for better lives. He has broadened OECD’s membership with the accession of Chile, Estonia, Israel, Latvia and Slovenia, and has made it more inclusive by strengthening its links with key emerging economies. Under his watch, the OECD is leading the effort to reform the international tax system, and to improve governance frameworks in anti-corruption and other fields. He has also heralded a new growth narrative that promotes the well-being of people, including women, gender and youth, and has scaled up the OECD contribution to the global agenda, including the Paris Agreement and the UN Sustainable Development Goals.

Born on May 8th, 1950, in Tampico, Mexico, Mr. Gurría came to the OECD following a distinguished career in public service in his country, including positions as Minister of Foreign Affairs and Minister of Finance and Public Credit in the 1990s. For the first time in a generation, he steered Mexico’s economy through a change of Administration without a recurrence of the financial crises that had previously dogged such changes.